by Lynne Mashhadi | The Plymouth Blog

Plymouth is cut off from the rest of the country to everyone but road users. I’d like to say this has never happened before, but we all know that’s not the case, don’t we? Sadly this situation is becoming all too common.

The recent storms which have lashed the South West of Britain have caused severe damage to the sea wall at Dawlish where the railway line runs very close to the sea. So severe that the line is literally suspended over empty space at one stretch. 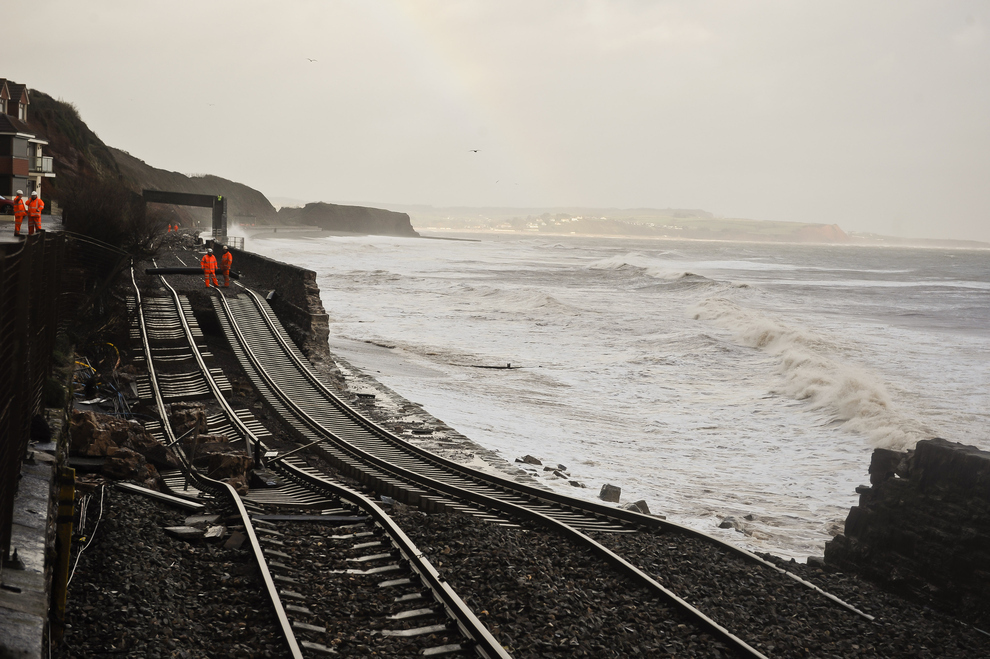 The rail link has been closed previously due to damage at Dawlish, but this latest catastrophe sets a new standard. The damage this time is so severe that it could take six weeks to fix. Not only that, with more storms forecast by the Met Office, engineers are not even going to attempt to fix the damage until the weather improves.

If we were talking about a Third World country then people might be saddened but not surprised. However we are talking about one of the wealthiest countries in the world, a so-called developed country. How can this state of affairs exist in 21st century Britain? How can the rail link reaching two counties of Britain be unusable for six weeks?

We can’t guarantee that it won’t happen again either. We’ve had a January that has seen unprecedented rain. February isn’t any better so far. Climate change and rising sea levels may mean that this is just the start of things to come, yet the Government still don’t appear to be taking the situation seriously enough.

Repairing the line must surely be a temporary measure. The only permanent solution is to re-route the railway line away from the coast at Dawlish. It would be less scenic, but a heck of a lot more practical. A firm commitment to move the line is what’s needed, but the government is still talking in terms of ‘maybe’ and ‘possibly’.

There is Plenty of Money for Everything Else

Each successive government has found the time and money to tinker with an education system which had nothing actually wrong with it. Worse still the government are investing billions in the new HS2 rail link serving the North of England, a region which many argue already has good rail links. Yet they somehow have failed – repeatedly – to find the time or money to improve the woefully inadequate rail infrastructure into Devon & Cornwall, two of Britain’s largest counties. This is not a luxury, it is essential to our economic survival. It seems beyond belief that our government would be willing to let an entire region be cut off like this, and yet their lack of investment seems to have done exactly that.

If Plymouth still had an airport it wouldn’t be quite so bad, but we all know what happened to that. Due again to a lack of local and national government support.

A reliable rail link is not a luxury, it is essential to our economic survival. #Plymouth

David Parlby, chief executive of Plymouth Chamber of Commerce has warned that the region could lose more than £500 million pounds as a result of the railway line closure. This is simply unacceptable to a region that is already struggling thanks to the recession and lack of previous government investment.

This is not just a problem for Plymouth and Cornwall. Let’s face it, if you want to visit Somerset at the moment, you’ll need a snorkel and flippers. This is an issue for the whole of the Westcountry. Just because we’re across the other side of England from London, doesn’t mean that we don’t matter and can be ignored.

What We Need Now

We need to make our Government realise that if they carry on ignoring Plymouth, Devon and Cornwall, then economic disaster will surely follow. We need our Government Ministers and top Civil Servants to forget for one second that the Westcountry isn’t within the M25. Then we need them to, finally, decide to spend a little money and effort to do something significant to support us.